The latest and coolest addition to Westport

The DWC Co.Starters business course has been a hub for innovation on the West Coast. The nine-week programme has seen a range of creative ideas taking shape, becoming viable business models. In this monthly series The News and Development West Coast highlight some of the inspiring local entrepreneurs who have graduated from the course and are making an impact on the region.

With a string of exciting new shops and businesses opening, there is a real sense of rejuvenation going on in Westport. One of the newest and coolest additions to Palmerston Street would have to be Co.Starters graduate Kelly Ginley’s new shop – the NZ Barber Shed Westport.

A born and bred Coaster, Kelly grew up on the Syron family farm just out of Waimangaroa. Not long after marrying Eamon Ginley, another Westport local, they moved overseas for a 20-year stint while Eamon worked for Holcim. During this time, they lived in China, Australia and then 14 years in Jakarta, Indonesia

“In Jakarta I was heavily involved in the running of a large charity association that raised $500,000 a year to help orphans, the elderly and homeless of Indonesia,” Kelly says.

“We also had our two children while living in Jakarta. In 2015 we decided to return to Westport to bring the boys up in a Kiwi lifestyle and be able to spend time with family.”

This year their youngest son started high school, which led Kelly to think it was time to get back into the workforce and start her own business.

“The idea has been in development for 18 months. While having knee surgery I had too much time on my hands and was thinking what sort of business I could start. Having experienced long waits getting appointments at local hair salons and having a house-full of males, I knew men didn’t like to make appointments.

“I have also noticed on my travels many of the super cool barbershops popping up around the world and how popular the traditional barbershop was now becoming. I wanted to bring this to Westport.

“These barbershops brought back memories from my childhood. Memories of my grandad taking my brother to Peter Phibbs old barbershop and the smell of Bay Rum. Why can’t our town have something just for the guys, that looks good, smells good, and is just …. well come and visit the NZ Barber Shed and judge for yourself,” Kelly adds.

“I’ve modelled my shop to be retro, old style and with that West Coast rustic flavour. There’s definitely a bit of my Dad, Juicy Joe Syron, in there. His old cream can holds the front door open.

“The barber chairs are new, but very old school at the same time. Music pumps out of the old vintage radios on display, and just for the small kids there’s a Marvel Hero skateboard as a booster seat, instead of the old plank of wood the barbers used to use. It’s about giving an experience not just a cut. I want people to look forward to their next visit,” she says.

Before jumping into business Kelly signed up for the CO.STARTERS programme being delivered by Buller REAP and EPIC Westport.

“I had heard really good reviews about Co.Starters. I was really keen to get started in business but wanted to learn as much as I could about starting a new business beforehand, so I could work out if it would even be viable.” she says.

“I really enjoyed the social interaction of the group. It was really interesting meeting people with all different businesses and business ideas. Each week there were local guest speakers who would give an honest insight into the highs and lows of starting up a new business. There was no sugar-coating during the course. They really wanted to help everyone understand if their idea was going to work or not, and if not - how could it be improved to make it work. The bottom line for me was to really understand start-up costs and when my business could start to show a profit.”

Luckily for Westport, Kelly decided her business idea would be viable, so she opened shop in the town she loves.

“Small towns can really embrace a new business. Word of mouth is a big seller and networking is so much easier as almost everyone knows everyone. Six degrees of separation becomes 1 or 2 degrees in Westport.” Kelly explains.

“I’d like to offer a unique barbershop experience for Westport and make an iconic shop that attracts tourists and locals. Let’s put Westport on the map even more!”

For a haircut, and an experience, visit Kelly at the NZ Barber Shed on Palmerston Street.

“I really enjoyed the social interaction of the group. It was really interesting meeting people with all different businesses and business ideas. Each week there were local guest speakers who would give an honest insight into the highs and lows of starting up a new business." 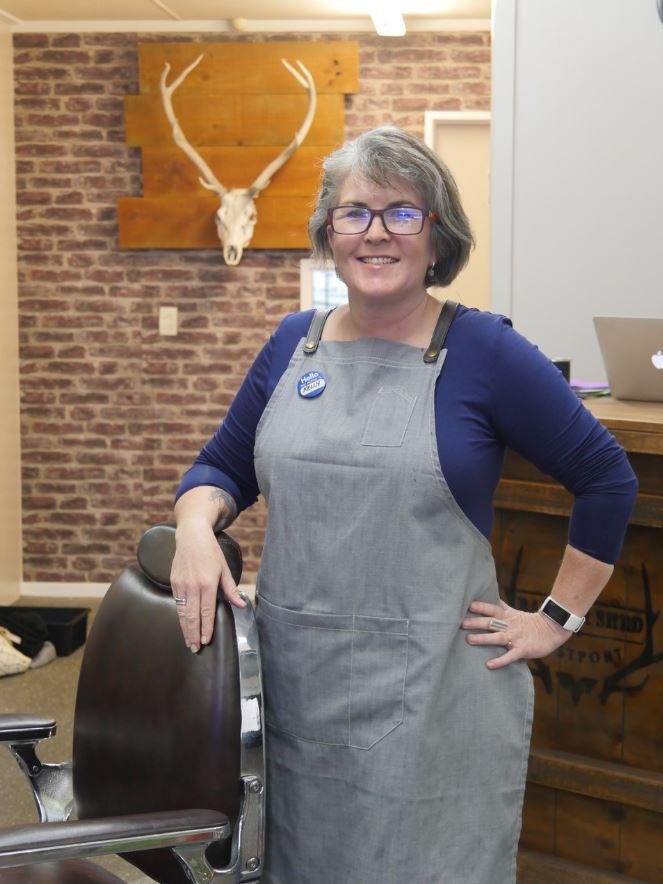 CO.STARTERS graduates Sarah and Jason Johnson have made the leap into the world of entrepreneurship with their new craft brewery - Hopaholics.

CO.STARTERS graduate Rita Costen and her husband are making the Coast shine one building at a time with their new exterior cleaning business – Wash R…

CO.STARTERS graduate Miriam Rees is using milk from her goats and beeswax and honey from her hives to handcraft a range of rustic beauty products wit…

CO.STARTERS graduate Kate Buckley is an artist, who not only creates amazing fine art but makes a living working with communities and groups teaching…